Innovation: A breakthrough for Bipartisanship

America’s new found energy abundance is built on technological breakthroughs in the production of oil and gas, remarkable progress in energy efficiency and substantial improvements in the cost and performance of renewable energy sources. For example, breakthroughs in federally funded energy research and development (R&D) supported the shale oil and gas revolution that adds $430 billion every year to U.S. GDP. In 2014 alone, energy efficiency saved U.S. consumers and businesses $800 billion and renewables accounted for 42.5 percent of growth in global power generation. This energy abundance provides the economic foundation on which to build the next generation of cost effective, low carbon energy technologies. Progress, however, is not inevitable. Investments in scientific discovery that drove the 20th century American economy have waned in recent years, threatening our place as the global leader in innovation.

In 2010, BPC formed the American Energy Innovation Council (AEIC). Over the past six years, AEIC has worked to increase public support for critical R&D efforts while reminding policymakers of the powerful connection between innovation and economic growth.

The innovation agenda represents a rare opportunity for bipartisanship

As CEOs and business leaders in technology driven industries, AEIC principals understand the value in strong public-private partnerships and the challenges of innovating in complex technology sectors. The global demand for clean, affordable and reliable energy presents an enormous economic opportunity, yet innovating in the energy sector presents unique challenges. High capital costs, slow capital turnover and substantial technical risk all present significant barriers to private investment. Programs such as the Advanced Research Projects Agency—Energy (ARPA-E) are focused on overcoming these challenges. AEIC continues to strongly support ARPA-E and we are pleased that Congress is working to increase funding for this successful program. 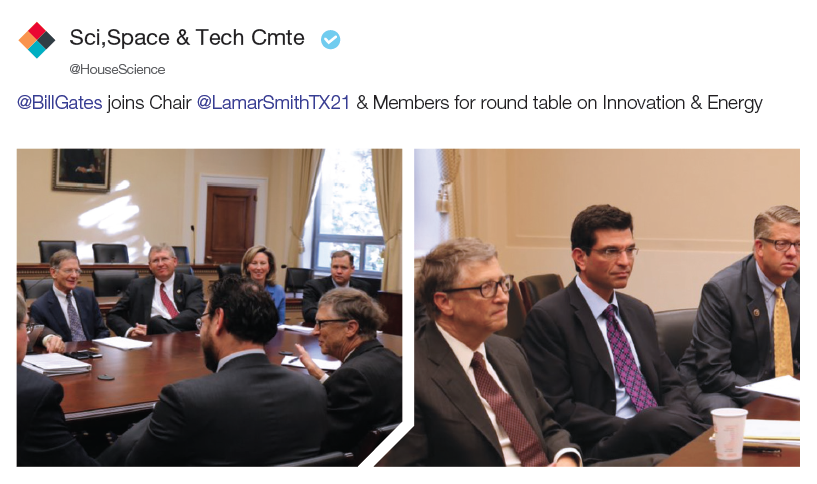 In the last several months, policymakers have begun to act on this innovation agenda. On the first day of the Paris climate talks held late last year, a coalition of 20 countries announced they were doubling their energy R&D efforts over the next five years to $20 billion as part of the Mission Innovation initiative. The Breakthrough Energy Coalition (BEC), a group of private investors led by Bill Gates—an AEIC principal—committed to providing billions of dollars in patient capital to commercialize these transformative energy projects. The influx of private capital supporting early commercialization ensures that promising technologies can move quickly from the laboratory to the marketplace. Relying on private capital to commercialize these technologies allows government to focus tax payer dollars on true R&D efforts.

In the polarized energy and climate debate, the innovation agenda represents a rare opportunity for bipartisanship. The AEIC and BPC’s Advocacy Network are working with leaders from both parties to harness the economic and environmental benefits of American ingenuity.